Thunder van de Zuuthoeve was born in 1996 in the fields of the late René Vets (deceased 08/2010) from the Zuut in Lier, giving him the ‘van de Zuuthoeve’ extension to his name. His dam was Jura van St. Maarten (v. Nimmerdor) and his sire was the Hanoverian legend Argentinus (v. Argentan).

Already as a young horse, Jura performed very strongly and took part in the World Championships for Young Horses in Lanaken with Joris Vergauwen. In the stud farm, she also excelled and became the dam of Wunder Boy van de Zuuthoeve, the full brother of Thunder who is approved by the SBS stud-book. Jura is now retired and enjoying her old age in the fields of the Zuuthoeve. 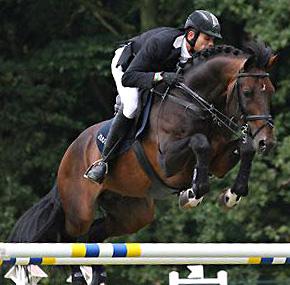 Thunder has achieved exceptional results. In 2006, under Jos Lansink, he came 2nd at the Belgian Championships in Kapellen and won the Masters in the Panhof in Peer.
Since 2007, he has competed with Jan van Dijck. This duo has achieved top marks in various national Grand Prix competitions.

Unfortunately, Thunder had to be withdrawn prematurely from international sports in 2008 due to a serious injury he suffered at the ‘Sires of the World’ Jumping Mechelen event with Jan van Dijck.

With sadness in our hearts we had to say goodbye of the beloved stallion Thunder of Zuuthoeve this morning. Six years ago he had an accident during the Sires of the World. By his severe tendon injury his sports career was halted abruptly. Thunder slowly but surely deteriorated from his injuries, this morning he was totally exhausted. It was a difficult decision, but we decided not to let him suffer.

As promised grandpa and breeder René Vets (Deceased 2010) his favorite Thunder of Zuuthoeve will return to his favorite stall after cremation.

The most significant achievements were perhaps made by his offspring. Everywhere you go, there are Thunders stealing the show. The most famous is probably Depardieu van ‘t Kiezelhof. He jumped with Guy Williams into winning places at various horse trials and Masters. Perhaps just as famous is Eurocommerce Seoul. This Thunder descendant also jumps at the highest level with the Dutchman Wout-Jan van der Schrans. And Daniel Deusser rides with Domingo, yet another competitive Thunder descendant.

Jan van Dijck, who has trained many young horses, has turned several Thunder progeny into famous champions. With Excenel V, he became Belgian champion in Gesves as a 4, 5 and 6 year old.
As a 7 year old, this approved son of Thunder was sold via Axel Verlooy to Jamal Rahimov.
Diktator van de Boslandhoeve was also trained by Jan van Dijck. He achieved fantastic results in America under the Spy Coast Farm rider, Shane Sweetnam.

In the meantime, thanks to the success of his offspring and his services to the stud farm, Thunder has earned the title of BWP Ambassador, alongside stallions such as Darco, Heartbreaker, Clinton and other top progenitors.